Everyday is silent and grey?

I have just read the book Humor and Information literacy by Joshua Vossler and Scott Scheidlower. The book is directed at librarian teachers, and contains many good suggestions on how to make your lectures more appealing to students. It is easy to read and have lots of examples and reading it is not a complete waste of time. This little blog post is not about the book, however, it is about what seems to be the fundamental idea behind the book: Information literacy/library instruction/librarians is/are so boring we need to include a handful of jokes.This is exemplified by the following passage: "I cannot imagine that anyone who walks into a library instruction session expects an ideal performance. They are too busy dreading the coming hour of boredom". The authors cite someone else here, so this is not necessarily their viewopint.

I agree with the fact that some library instruction can be dreadfully boring. But so can chemistry, business or art history lectures. But I have yet to meet a lecturer in chemistry who thinks his subject is boring. What have we librarians done to get this reputation, and not least, to think these thoughts about the profession we have voluntarily chosen to work in for a longer or shorter part of our lives?

I don't find my work boring at all. I think I have a truly interesting job which I am very passionate about. I work with the dissemination of knowledge - what could be more exciting than that? When I teach information literacy I teach students how find, use and evaluate information. I try to make them think critically about what they read and write. I try to make them learn more and better. If I actually found these topics boring I should not be allowed to go near a classroom to teach.

My point here is not that I think students find our classes fantastically fascinating. I know they are bored. But they are bored in almost any classroom. I am frequently bored myself when attending lectures, usually because I'm too tired too pay attention. My point is that we as librarians must have another attitude to our job. We apparently need more confidence and more enthusiasm. Without these we shouldn't be teaching. It's as simple as that. An enthusiastic teacher can make anything interesting.

Back to the book: please don't hesitate to bring humour into your teaching, but not because what you're saying is intrinsically boring, but to make your lecture EVEN BETTER. 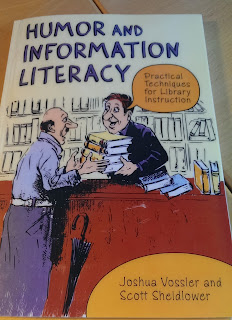 Should have done this earlier. Impressions and memories are already fading, so I only have a few notes to help me remember. Some things are not easily forgotten, however. This year's highlight: The bumper cars:) This year's disappointment: The food:(

And what about the rest? As usual UKSG is a wonderful conference, which I truly recommend to anyone working in libraries. I'll be extra bold and claim it's the best European library conference I know of. I've been twice now, and the quality and relevance of the presentations are usually of a slightly higher standard than I've seen anywhere else.

This year's opening session however, failed to impress me, with one of the speakers being both dull and uninteresting. But from then on everything got better. My favourite on day 1 was Laurel Haak from ORCID, speaking about connecting research and researchers. In addition, Brian Kelly deserves mention for his talk about "Spotting tomorrows key technologies" and how we need to base our decisions on evidence.

Day 2 got a flying start with very good presentations by Lynn Connaway and Joshua Harding, both focusing on students and their expectations of libraries. If you have time, watch Hardings presentation on YouTube! He might not represent your average student today, but maybe tomorrow!

Of the break-out sessions I particularly liked Liz Waller and Sarah Thompson who talked about the work that has been done at the University Library of York to enhance user satisfaction. "Great expectations: how libraries are changing to meet student needs" was the title of their talk. (Couldn't find it on SlideShare.)

I also enjoyed several sessions on metrics (and altmetrics). Linda Bennett, Paul Groth and Mike Taylor all gave illuminating talks on the topic.

Day 3 had to be cut very short for my part in order to catch the direct flight from London to Tromsø, but managed to be present at the first couple of hours before rushing to the train station. After Simon Inger it was farewell to Bournemouth from me.

There's more to UKSG than just the presentations. The fact that this is a conference for both librarians and publishers makes it stand out from the rest. I like that we are presented with other viewpoints than just the librarian's. And I like the way these two different cultures come together at UKSG. Yes, they are constantly trying to sell you their products, but they are also showing you the information world from their point of view. Which can actually be useful for libraries.

As always UKSG is a very social conference. There are plenty of networking opportunities, and best of all: there's always dancing after the conference dinner. (For any foreign readers: no one dances at Norwegian library events!) Every year has its own theme and this year's was 'fun fair'. I truly hadn't suspected that they'd actually create a fun fair at the dinner location, but they had. With rodeo bulls and bumper cars and what not. My initial skepticism to the bumper cars evaporated fairly quickly after the first ride, and I laughed and screamed through several more:) In another room, a grumpy DJ played old and new classics and provided a bit of exercise for dance hungry librarians. (He refused to play any of my song suggestions, so I wasn't impressed at all!) Kudos to the Swedish delegation for stamina on the dance floor, by the way:) The quiz night was also fun, but I'm deeply disappointed that the quizmaster couldn't come up with newer artists in the music section than Rick Astley. We're not all half retired, even though we work in libraries!

Last, but not least: I've spent the last 10-20 years trying to persuade people that British cuisine is so much better than its reputation and can compete with the French kitchen any day. But what is wrong with Bournemouth? I've never had so much horrible food at a conference before. Apart from a very nice meal on Sunday evening with CUP, the rest of the meals consisted of cardboard in various shapes and textures. The quiz-food was absolutely horrid! Hope things taste better in Harrogate next year:)

Videos from the plenary sessions are available on YouTube.

PS. Apologies to all the other great speakers who are not mentioned here, simply because my notes weren't good enough!
Lagt inn av Mariann Løkse kl. 15:57 Ingen kommentarer:

Two conferences in Britain in a fortnight is hard work, especially with Easter and a few days back in Norway in between. But I am far from complaining. Both conferences were really good, and Britain is after all my favourite country to visit.

The reson for attending LILAC (Librarians’ Information Literacy Annual Conference) this year was that I gave a poster presentation together with my colleague, Torstein Låg. The presentation went well, I think, with quite a few attendants coming over to talk to us.

This was my first LILAC. For some strange reason, I've never been before, but I'll certainly do my best to come back. Since information literacy is one of my key fields of interest, this is really a useful conference. In adition to all the good talks, meeting so many like-minded people is really a value in itself. I particularly liked the focus on building up library competence in pedagogy, an issue which is not prioritised a lot where I work.

When looking at my notes, I see I attended 16 talks and presentations these 2.5 days. And almost all of them were interesting and well presented. I've struggled hard to pick out just a handful.

The first keynote speaker was Steve Wheeler who did an excellent job at getting our attention giving us an outline of what he called Learning 2.0: Digital pedagogy. Much of what he said about knowledge, libraries and transliteracy felt very relevant, but I wished for more depth in his presentation. (Which I suppose I can get my reading his texts.) (Video of the keynote will apparently be published on the LILAC web site.)

Andrew Walsh and Nicola Howorth gave an inspiring talk on their project '9 research things' directed at PhD-reasearchers. (I think.) Would very much have liked to try something similar back home! The same can be said for the induction activity 'Murder in the library', introduced to us by Olivia Else from the University of York. Maybe a bit too ambitious for a small university like mine, but absolutely worth having a look at.

Finally I have to mention Sheila Webber who gave (at least) two talks plus a poster presentation. Her enthusiasm made me very happy to be among the audience. I especially liked her talk about deep critical information behaviour. I found a lot of what she said about the library's interaction with users very to the point and relevant, for instance stop telling useres how easy everything is when we teach searching library resources etc.

The last name I want to mention is Lucy Collins, because she, and quite a few others, stressed the importance of us librarians taking some sort of graduate certificate in university teaching and learning. I think this is essential to raise the level of our IL teaching to a more theory based reflection on what it means to be information literate for today's students (and researchers).

There were a handful of other presenters I also liked a lot, and the fact that the list is longer than I have time to write about, is a good sign of the quality of LILAC 2013. I probably must bribe someone to get to visit LILAC 2014, but I will try anyway. (Or maybe I should write that it was an awful conference to make sure no one else from Tromsø wants to go there next year!)